Blogs of big business has always interested me. Google was the first to jump out at me as they do a good job of not being boring. Not being boring really is key and something tells me that General Motor would not try to make their blog anything more then a car commercial. One of the blogs that not as many jumped on was Ask Jeeves. Bloglines said Ask Jeeves only has 435 while Google has 10,500 subscribers. As much as Ask Jeeves isn’t dominating the market I find their blog much more interesting then Google’s. I could never pinpoint why, it was just a general sense that they were having more fun and were just a bit zany.

Today i think I really found why I was so attracted to their blog and it turn out that their deep sarcasm is close to my own. Ask Jeeves just announced Virtual Neptune which makes fun of Virtual Earth by name and Google maps by interface. By their own promise, “Virtual Neptune utilizes powerful satellite imagery, and will soon be combined with mapping and local search to put Neptune’s geographic information at your fingertips.” I can’t tell you how much I look forward to local search and how much I love the barley tampered with clouds photoshop filter.

While I don’t really use ask Jeeves that much beyond Bloglines they sure are having fun and I hope they find ways to best google beyond biting sarcasm.

My Adventures with hCal, iCal, webcal and their lack of support

Working on a project that involved events I wanted to add the ability to click a button and add that particular event to you iCal enabled calendar. iCal does not work every where and right now it is limited to a select number of calender programs. In general this is a rather new idea and and is only implemented will in a couple of places (like Upcoming.org).

There are a couple of reasons that this feature has not proliferated more. One is that the programs that support iCal are not widely use and are not always associated with the iCal standard by the typical user. Second is that iCal is not easy to write out. It’s meant to be read by a computer, not a person and so most will shy away from manually typing the awkward formatting. Another reason is that the way to bridge this problem of human/machine readability was only created about a year ago. Called hCal it stands as a XHTML solution to adding event information directly in a web page.

What does adding these XHTML tags to your page get you? Well that’s the problem as of today there is not a large advantage to adding the tags. The tags are there to be read by some other online application that will see these tags and then do something with them. These exciting applications that interact with hCal tags are almost nonexistent at this point though. Currently the only Fancy widget I know of to work with the tags (beyond the occasional CMS plug-in to list the events) is XV2 which can actually take the XHTML tags and turn it in to an .ics iCal file that you can add to the iCal enabled calendar on your computer. But even this is listed as a beta and is only done on a small scale.

Another feature to bootstrap the iCal technology is a (new?) web protocol called webcal. With this you replace http:// with webcal:// and this gets your browser to launch your iCal enabled calendar to add the event. I don’t know much about webcal since there is little written about the protocol. While Firefox recognises the protocol IE has no idea what it is and just refuses to do anything. It reminds me of another protocol where you replace http:// with feed:// to denote a xml feed but even my up-to-date firefox doesn’t know what to do with that and I don’t know exactly what program does. Even Wikipedia doesn’t seem to have anything to say about either feed:// or webcal://.

So if you see event information and are lucky enough for them to be formatted in the special hCal tags and there happens to be a link to add the event to your iCal enabled calendar and you happen to actually have an iCal enabled calendar AND your browser suports the webcal protocol you have a killer combination of technology. Until more applications can do things with hCal adding the tags don’t really have much of an advantage. XV2 is letting me use my hCal tags to generate iCal files but if the load got to be to large it would not be fair to pass that onto XV2. Something needs to take a bigger role in hCal and iCal before it really gets a chance to take of. A while a go there was report that google might come out with some support for hCal. I think technorati would be a good place to have some hCal support and with Tantek kind of spear heading the microformats I would not be surprised if they were that far off from releasing something.

NEWD was very cool and I’m so glad I was up in Boston in time to meet some really great local designers. In fact it was not as local as you might think Dan and Ethan seem to have a little bigger draw with people coming out from Connecticut and the like. Dan and Ethan were great host and were really gracious to all the geeks who showed up. I think they enjoy the randomness of some of the people who do show up.

Because they knew techy web designers were coming the power went out in the general area. I’m still not exactly sure what happened as street lights were out as I was walking to the bar and the bar’s power was out but all the surrounding businesses seemed to have power. We ended up just going to a pool hall around the corner.

Networking is tons of fun and anyone who says other wise isn’t doing it right. I read some where recently that the average person can only have about 150 casual relationships (not the article but something close enough). Casual meaning if you bumped in to them on in a restaurant you would feel comfortable grabbing a meal with them. Now I don’t know if I’ve ever known that many people at one time but if I do in Boston I’m gonna see how many web designer connections I can make on my way to employment.

I don’t know how many people have given the gmail settings more then a cursory glance but I was poking around before and found an option for personal level indicators. This little feature puts little arrows in front of your emails. One arrow denotes that your email address is specifically listed as a recipient among many and two arrows shows that you are the sole recipient of the email. This makes filtering email at a glance much easier and pulls attention away from any spam or list serves that might not be immediately important.

It’s a really small flourish that I wonder why it’s not turned on by default. Perhaps they make people turn it on just so they know what the little icons are. I didn’t notice this feature until recently and I never read about it any where so hopefully I’m not the last to know.

Recently, actually the same day iTunes came out with the podcasting update, I downloaded iPodder as I did not want to be left behind and wanted to see what all the noise was about. Few shows seems to have caught my interest since then. One that did catch my interest was The Chris Pirillo Show. I had never watched The Screen Savers on Tech TV as I was sans digital cable and so the reason the show stuck out was the focus on emergent web technology and the delightful banter between him and Ponzi.

Recently he interviewed Rick Kim from Cyworld which is a web service from Korea that has really taken off and seem to have 90% of Korea in the palm of their hand. Chis is usually a good interviewer because while he is very knowledgeable he does a good job of ‘pretending’ he doesn’t know what his interviewee is talking about to get better explanations out of them (I bet I can hear Ponzi laughing in the background already). This works really well in most situations when he does know what’s going on but when Rick came on Chris seemed to miss the boat of understanding.

Cyworld really is revolutionary in it’s inclusion of elements from other places. Chris blows the service off as some kind of glorified geocities where you have to pay for backgrounds but it reality it is so much more. If I had to define it, after doing some research on it, I would more associate it to SecondLife. SecondLife has a monthly fee like World of Warcraft but you can pay extra money to buy things like land or whatever. While there have been detailed studies of online game economies since Ultima Online every one always seems to be surprised when actual money starts to come in to the picture.

Cyworld is basically a social network. For free you can sign up for an account and you get a little page that includes a personal profile, diary, mini room, photo album, bulletin board and message board. Non of this is out of the ordinary and sounds a lot like MySpace that has (unfortunately) become very popular in the US. What is unique is the mini room where for free you get a small customisable avatar and an empty room. But if you want to decorate the room you have to buy little object with real money. The objects are cheep (under $2) and some even only last a limited amount of time. The object also are part of the social networking as you can buy gifts for others and these gifts end up effecting your friendly or sexy score.

The trick seems to be offering something for free and then making available other stuff to buy. It’s a model cropping up all over the place. iTunes is a free download and does a great job on managing people’s music and now it even lets you manage your podcasts. Oh and if you’re up to it you can purchase music from one of the largest online music stores in the world. Google Earth is a free download with amazing functionality and with a small fee can also be upgraded to even more powerful features. It’s this kind of pseudo-shareware that seems to becoming very pervasive in the online market the way it was with video games in the early 90s. 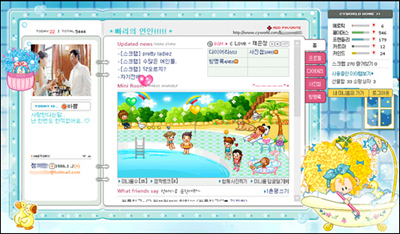 Chris really dropped the ball on this interview and really sounded insulting to Rick. Any company that is making $200,000 a day should be given more respect and understanding. After seeing TheFaceBook sweep through TCNJ and people truly becoming obsessed with it I can easily see Cyworld taking off in the US. Currently I see it’s main competitor to be MySpace in the obsessive social networking sphere. I wish it the best of luck and while I do plan on trying it (I’ll sign up for about any free service) I don’t plan on spending any money since I’m a bit cheep.