The biggest news from a youtube creator since annoying orange got it’s own tv show. Meghan Camarena of Strawburry17 and Joey formerly of WinterSpringPro and now his personal channel JoeyGraceffa are going to be on The Amazing Race. And what a great team they will be (or were as the show has already been filmed).

While exciting news for the youtube community who hunger for broader recognition and validation no one is surprised that these two have made such a deal. Both Meghan and Joey are growing stars with a lot of energy and know for their hustle and hard work to make ends meet on youtube Increasingly with low CPM ad impressions and views harder to get as youtube redesigns for bigger partners burgeoning stars have to find more and more way to bring in extra money.

What might have attracted The Amazing Race to these two untested stars?

First Joey and Meghan have almost half a million subscribers combined. Of those Meghan gets on average 20-30k views and Joey between 60-100k view. Of those views I would guess they are in the 13-17 age range and mostly female. This demo, while hard to track on Nielsen, would be an attractive audience for the CBS show to bring in. While holding stead at about 10 million viewers The Amazing Race will need to continue to find new audiences to keep their numbers up on a network where many shows are doing well.

Second Joey and Meghan are naturals in front of the camera practicing talking to a camera for years. Few people get this training and few contests have a proven body of work to demonstrate how they will be on the show.

The benefit is not all on Amazing Race’s side though. Look for Meghan and Joey to take full advantage of being in front of 10 million viewers weekly. I expect to see some interesting weekly online content and live interaction as the show airs building new viewership for their channels as well as the show’s.

Backstretch is a pretty great slideshow library both because of it’s features as well as the small amount of code it is all done in. But when implementing a code light library you will always run in to the problem of needing the library to do things that it does not have features for. And for that reason I’m going to highlight some of the features I built in to my own fork of Backstretch, all of wich are also documented on github.

Pause: By default the slideshow just starts to play but for us we wanted to start out with it just sitting on one slide.

lazyload: By default all of the images you pass in are loaded. This is not great for page speed and so this option only loads image when the slideshow goes to show the image or specifically requested though a call.

start: The array of images you pass in will always be shown in that order. But if you pass in an index then the slideshow will start at that point.

default_height & default_width: These are actually in the original library but were undocumented. This just speeds up getting the slideshow to draw it self correctly if you know the height and width in advance.

cacheNext() & cachePrev(): With lazyload turned on the next image will not start to load until that slide is requested. With this call you can choose when is best to preload that next or previous image. I always keep the next image in the slideshow cashed and ready to show.

You can find all these features on my own fork of Backstetch where I will also attempt to keep it up to date with the main repo.

Is my JPG progressive or baseline?

Ever wonder what format your JPG was saved in? Well wonder no more. Just open the JPG up in any text editor and do a search for the hex code ffda.

As blastmedia has discovered Youtube is experimenting with the google plus button in place of thumbs up and thumbs down. Currently it doesn’t tie in with the rating system that google has in place and so for people who see the Google Plus button they are bard from giving a thumbs up without using the google api or switching browsers.

I can’t say I’m a fan. Like and Dislikes used to not be public let alone show in organic search results. If this feature is adopted every +1 has the potential to apear in search results. Ug.

Youtube originally did 5 stars but most people just voted 1 or 5 stars. So we got thumbs up or down. Now with Plus we loose anyway of providing negative feedback.

There are many reasons to no have negative feed back. All of them have to do with one group of users mas down voting content either for their own advantage or to discourage other groups of visitors. Youtube does not have this issue. There is no way to mass effect video ranking on youtube by disliking a video outside of botting. Wich to be fair @thewillofdc points out that Google has been lax in fighting botting as of late.

Some will say that letting people do a negative action on a site is never good and I would strongly disagree with them. Currently the down vote remains one of the more civil way on youtube to voice that you did not like a video. A great example of a valid use case is the Rick Perry Strong video which has a near 99% dislikes and for good reasons.

Negative comments remain much more damaging then down votes. Youtube is known, for good reason, as some of the most vile comments on the web. I can only imagine that letting people voice their dislike with a simple action stop even more horrible comments.

Please youtube. Add Google Plus as an option to the page. But leave the current ratings system in place. Both can coexist and content producers will definitely encourage users to +1 as it will clear help in google ranking. 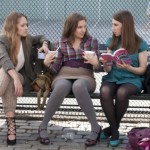 I was super lucky to get to see the first three episodes of GIRLS at sxsw. The trailer released only a few short weeks ago quickly outlines a quirky comedy in the style of sex and the city that replaces the 30 something Gen-Xers  with 20 something Gen-Yers. And being on the cusp of those two generations I think there is a big difference between the 2.

Tiny Furniture, Lena's hit movie, was something I was very excited to see and while it had an amazing voice for women in their 20s I didn't love the movie. I thought the plot was too slow and awkward pauses not used artfully enough to not just become uncomfortable. These were issues of polish but the voice was there and it was exciting.

Judd Apataw is a great combo for Lena to work with. He is a seasoned producer and has the magic ability to not only cultivate great tallent in others (aka Seth Rogan) but take topic that has failed in movies past (aka Kevin Smith movies) and make them enjoyable for a wide audience without removing the unique and quirky spark that made them good.

GIRLS is still slow at moments and some moments are still a bit to awkward to work on screen. But The outcome is everything you could hope for from a collaboration between Lena and Judd. The jokes are amazing and hit often and hard without seeming like sitcom. The characters are all perfectly lovable while still remaining horribly flawed. A balance every show hopes for but few ever achieve.

Zosia Mamet also needs to be called out. In many ways she has the most over the top character to play which can be difficult to pull off. But she glows on screen and makes the ridiculous also believable and the hilarious simultaneously heartbreaking.

This show is not a masterpiece, but it is really really good and super funny. One of the many things I love about television is the iterative process of writing it. Shows change because they get feedback from an audience. And few shows ever have the first few episodes as the best of the series since they lack this interaction. GIRLS is perfect set up to a great series. Every flaw can be fixed and I believe this show is on a path to fix everyone.