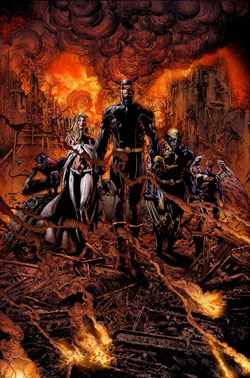 It’s been along time since I’ve been in to comics. I went off to college and simply ran out of time to devote to them. Now six years later I was thinking about getting back in to them but I’m a much different fan now then I was then.

I’m not a collector yet from my youth I have five boxes of bagged and boarded comics in my closet taking up space and mostly just pissing me off when I need to move. I’ve been avoiding trying to sell them (not really worth anything) and instead looking for some one who might want to read them. No luck though and most libraries will not touch them because single issues are not durable and no one wants to catalog five boxes of comics.

With these boxes acting as a thorn in my side I can’t bring myself to buy more single issues. I could move over to TPB collections but really that’s not addressing my space issue though perhaps it would be easier for me to convince me for a library to take them.

Marvel has a digital comics service for $10 a month that I was hoping would serve me better. The comics can only be viewed in a flash player and can’t be saved to the computer. Perhaps one day it will be a good service but so far it’s has such a limited selection it’s just frustrating. They are so focused on getting up old famous issues that there are very few long complete runs of books up to current day. Personally I would like to just follow the x-men comics six months back but they seem very random in how they update and who knows when they will add the next issue.

Though marvel has a good service fee the selection made me sad. I had heard comics were on Bittorrent so I took a look there. With my $10 fee to marvel I did not feel too bad about downloading the entire Messiah Complex crossover and take a look.It seems it was digitized by the Digital Comics Preservation (DCP) a lose knit group of people who digitize the comics at a really fast pace and put up huge collections of comics on bittorrent.

They package the comics in a CBR format that is actually really nice when viewed with a digital comic book reader. I tried a couple and I really recommend ComicRack which has lots of preferences to set so it will work the way you want it to. I like to zoom way in and drag the page around with the mouse.

The CBR format is simply the way I want to read comics. I don’t want to collect them I just want to read them and this is the best way to do this.

How is there not an iTunes for comics? It would be so easy for Marvel and DC to digitize everything and get it online. Obviously they are worried about cannibalizing the local comic book shops that have been in trouble since the mid 90s. And in truth it probably would take business away from them. There will always be people who want the physical book and the question is just if it’s enough to warrant the printing of the books.

Of course once you start thinking about buying the book online you can start to think about the cost of publishing. If a comic does not need to be in the shop then they don’t need to spend money on printing, shipping, and advertising in the diamond distributer book. The price could come down from three dollars to maybe one or two and probably get Marvel and DC more profit then they were getting from selling dead trees.

I don’t know if I’ll stay subscribed to the Marvel Digital Comics or even if I’ll get back in to comics. It’s hard when I want to stay up to date but I don’t want to buy the physical issues. No one will sell me CBR files and though I can download them for free I did grow up in comic book shops and I can’t bring myself to steal the books. MP3s are different because I like to go to the concerts of the bands I like but there is no way for me to give back to the comic creators with out buying the books that I don’t want.

So I’m left in a lurch with no way to read comics the way I want to. If anything this will just make me too frustrated to bother to get back in to comics. Perhaps I will if DC or Marvel really gets their act together.