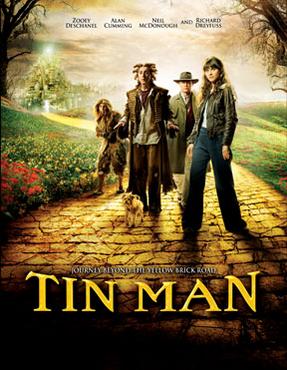 So only one episode has aired but there is a ton of stuff to say about it.

Starting off with the strong parts the art direction is spot on. It really feels like a whole other world and it really sets whole series up to really shine. It’s just a shame that the art department was the only ones who knew what they were doing.

A lot of the good parts end there though. I don’t think any of the blame is on the actors. For the most part it seems to be a strong cast list.

The main problem seem to simply be the writing (Steven Long Mitchell, Craig W. Van Sickle) and directing (Nick Willing). The writers seem to have done a lot of work on The Pretender which was a great show but I don’t think really lends it self to a fairy tale re-imagining.

The plot has been needless changed instead of just just tweaked. A good retelling takes the core of the story and changes it just enough to make it new and interesting. Clearly there there brainstorming went on for too long. There are 100% too many robots, a plot twist that seems to add almost nothing.

The writing is painfully heavy handed. Having the Tin Men be a try of sheriff is great but using a line like “Tin Men are what we call Police” takes all the subtly out of it. Time after time things are over explained in stilted dialog. The moment completely remove you from the story and really lowers your enjoyment of the show.

Clearly the writers were not comfortable writing dialog as the plot rushes forward like a three hour mini series has no right to. A mini series has all the time in the world to pause and really build character but this does not really take advantage of that.

Even with all these problems it sill remains mostly a fun show and I hopefully can continue watching for purely superficial values. With better writing this really could have been a gem.