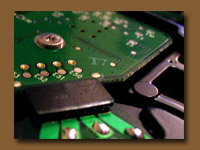 Or at least never buy a Western Digital FireWire/USB 2.0 Combo hard drive. Poking around I’m not ever sure they sell them any more but I don’t even know if I trust Western Digital any more. Reviews by anyone who has had it for any amount of time have not been glowing since its average lifespan is 6months or so. It certainly was the life span of mine.

6 months in it started to make a small sparking noise and you could tell the drive was not spinning up when plugged in. Not to mention the crazy lights that flashed on the front. The drive had no on/off switch, which at the time I did not give much thought, but looking back it might be a sign of flimsy manufacturing. I sent it back only to have it die on me again about 6 months later after the same sparking and flashing.

I tried to save the Hard Drive in the case but after connecting it to my computers power source it started to smoke. I wanted to take a picture but didn’t want to fry my computer.

The Western Digital customer service staff seems very convinced that the slightly over the 1 year service warranty is a good life for a FireWire drive. I seem to feel that 2 six-month hard drives would not have been as much of a problem if I were renting them instead of owning them.

So I’ll just fear technology for a while and hope my shiny new 256 USB Flash drive does not give me any problems.